“Rich, vivid descriptions employ all the senses; they are one of the strongest aspects of the novel. A root is described as ‘as thick as a slinking python’; ‘a makeshift but colourfully patched tent … with a yellow sock-flag waving on the pole at the tent’s peak’ appears at a fair. These details enrich the story and help build a world that’s undeniably intoxicating.” Lillian Brown awards five stars to Sky Walker Tehawennihárhos Charter

Sky Walker Tehawennihárhos Charter is the final book of the Mohawk trilogy, which covers a year-in-the-life. 1845-46. The Grand River Navigation Company has many steamboats and rafts on the Grand River but the Navigation is in debt and has bankrupted the Haudenosaunee/Six Nations Confederacy. The company does not pay dividends nor give any return to investors.

Structure matters. “As the creator of The West Wing and The Newsroom, Aaron Sorkin, puts it: ‘The real rules are the rules of drama, the rules that Aristotle talks about. The fake TV rules are the rules that dumb TV execs will tell you; ‘You can’t do this, you’ve got to do that—you need three of these and five of those.’ Those things are silly.” Sorkin expresses what all great artists know—that they need to have an understanding of craft. Every form of artistic composition, like any language, has a grammar, and that grammar, that structure, is not just a [social] construct—it’s the most beautiful and intricate expression of the workings of the human mind.” (John Yorke, the Atlantic, January 2016).

The plot structure of the Mohawk trilogy is complex, but not in the least unfamiliar. It’s down-home instinctive drama, as described by Aristotle and explicit in Weird Tit-for-tat. Jeddah Golden, Jennet Ferguson, and Squire Tehawennihárhos Davis play the game of survival and scramble to secure their safety. Each wishes, moreover, to make a lifestyle change, and deals with on-coming conflicts in his or her own way.

Yorke defends the literal and figurative journeys of fictional protagonists. “Storytelling is an indispensable human preoccupation, as important to us all—almost—as much as breathing. From the mythical campfire tale to its explosion in the post-television age, it dominates our lives. It behooves us then to try and understand [the urge for storytelling]. Delacroix countered the fear of knowledge succinctly: ‘First learn to be a craftsman; it won’t keep you from being a genius.’ In stories throughout the ages there is one motif that continually recurs—the journey into the woods to find the dark but life-giving secret within.” The Carolinian woods, the woods without, make a perfect backdrop for storytelling about the woods within.

Jeddah wants peace and quiet and a woman to love but he hunts for Bride Munny anyway, she who has run away from his farm in Uxbridge, north of Toronto.

Jennet wants to find Squire but at the same time she longs to turn into that woman, the brave soul who rises above a numbing winter existence on a Canadian farm.

The thought of owning land and taking his rightful place within the Six Nations Territory possesses Squire but to fulfill his dream he needs friends and allies. He wonders why Jennet has not answered his letter. Matters get resolved but not before each protagonist faces conflict and overcomes his or her demons in a time-honoured test of character. 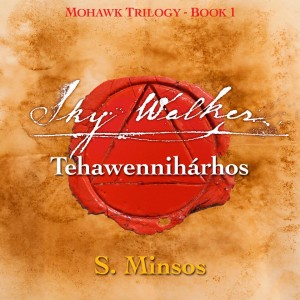 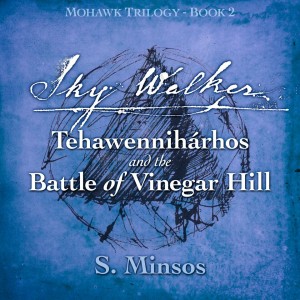 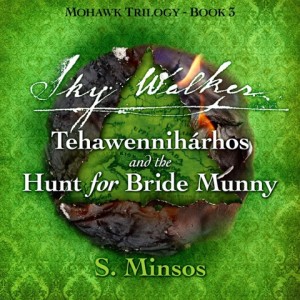 The Mohawk Trilogy is a saga about outliers in the alien world of the mid-19th century, Upper Canada.

Weird Tit-for-tat: the game of our lives for ordinary people

Joseph Brant, his mansion and his slave, Sophia Pooley

There is much to love in James Paxton’s Joseph Brant and his world: 18th century Mohawk warrior and statesman (2008). Exceptional writing and heart-rending illustrations and even the book’s silky pages. More to love is Paxton’s thesis: Joseph Brant is an 18th century Mohawk warrior and Pine Tree Chief who understands as well as any modern Canadian the necessity… Read more …

SKY WALKER TEHAWENNIHÁRHOS: CHARTER “Another highlight comes in the minor characters, who are brought to life in a multidimensional way that makes the . . . universe immersive and realistic. All characters leave a lasting impression, even those as tertiary as Miles Finlen, the tall, gruff barkeep who works tirelessly to maintain respect for his bar… Read more …

Bargaining is fraught with danger. You may pick the wrong prize. You may make a deal with the wrong person(s). You may wager the wrong amount and lose more than you can afford. The wrong partner may trick you to ruin the deal. A bad bargain is awful enough. But what happens when you are… Read more …