. . . Beattie writes “In 1912 the Federal Government became interested in the Canadian Horse Breed and purchased a black mare. Although she weighed barely 1000 pounds, Hélène (no 49) was teamed with a fifteen hundred pound horse from another breed and put to work. She had no difficulty keeping up with her heavier mate and seemed just as fresh at the end of the day as at the beginning, and thoroughly impressed all who used her. Before her purchase she had been bred to a spunky little stallion named Wilfred (no 1012) and the following spring she dropped a black foal. This colt was to become a foundation sire of renown. Albert de cap Rouge. He was sire of sires, and stood at stud at the experimental farms for nineteen years” (p16).

In the Mohawk trilogy Cap’n [Ed de Cap Rouge] and Poco are Canadians. Squire Tehawennihárhos Davis purchases the horses in Reach Township and brings them to Gould’s lumber mill in Uxbridge. Because Squire is impressed by Jennet Ferguson’s athleticism, he surrenders the valiant-hearted Poco to the Ferguson family, where, finally, Will Ferguson allows Jennet to have the horse. Jennet learns fast and proves to be an accomplished rider. Squire never relinquishes his horse, Cap’n, who is descended from Albert de Cap Rouge, and the Mohawk loves his trusty sidekick to the end.

With 20-20 hindsight, we know a continental holocaust was on the horizon. The American Civil War, 1861-65, was an unbearable calamity for men and horses. The annihilation of war horses proved devastating to the Canadians, who were a mainstay of both armies. Other calamities left a mark. After their use in the West Indies, the Boer War, and then not being needed because of farm mechanization, the Canadians’ numbers fell into a sharp decline.

“The American Civil War  . . . soldier preferred to shoot and kill horses rather than enemy combatants, because without horses, artillery became passive objects of heavy metal and without mounts the swift cavalryman was reduced to a plodding foot soldier now powerless to rapidly scout, locate and strike the enemy and its supplies. Take away the horse, and the triune army was stripped of two of its three major components, cavalry and artillery, leaving only disadvantaged infantrymen to carry the brunt. While cavalry, consisting of the finest mounts and chargers, was considered the eyes and ears of the army, the artillery branch, appreciating the brute strength of the solid-hoofed animals, consisted of mammoth bronze and iron weapons that were capable of eliminating an overwhelming advancing army. During the conflict it is estimated that between 1,000,000 and 3,000,000 equines died, including horses, mules, donkeys and even confiscated children’s ponies. It is estimated that the horse casualties at the Battle of Gettysburg alone, July 1 to July 3, 1863, exceeded 3,000. Diaries and letters of soldiers often mentioned the stench of dead steeds rising up from the fields of battle.”

Cavalia in Edmonton saw the Canadian horse taking its place with the other amazing geldings and stallions from all over the world. The Canadian horse was numerous among horse breeds during the 19th century and yet on the verge of extinction in the 20th century. Thanks to breeders and aficionados the little horse of iron has made a small comeback in the 21st century, but the breed is not out of the woods, so to speak:

“An unknown little Canadian treasure, this breed descends from the horses sent to the New World by Louis XIV. Named ‘the little iron horse,’ the Canadian is known for strength, willingness, curiosity and resistance to harsh climates. Once on the verge of extinction, there are now more than 2,500 Canadian Horses in existence.” 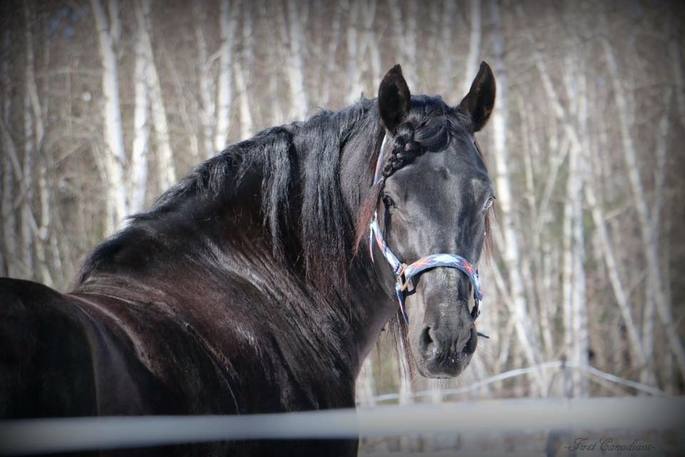 “Wakiza is very Canadian typey, dark black, tested EE and has a thick wavy mane and tail. Wakiza has a nice fluid movement, willing temperament, and loves to please. From kisses on the nose to skidding out logs and then being tacked up for a dressage lesson, he is always ready. He is very versatile and has great stamina.”

Origin of the Canadian

Excerpts from Lawrence Scanlan’s book Little Horse of Iron (2001): “And while they may have looked bedraggled and pitiful from the rigours of their voyage [to Quebec in 1665] as they climbed wet and exhausted onto the rocky shore, in truth they were exceedingly fine horses. The king had instructed his lieutenant and closest advisor, Jean Baptiste Colbert, to send to the colony only the best animals of France…. They were war horses, descendants of the Norman horses that took knights-at-arms into battle. Look at the 11th century Bayeux Tapestry  and you will see knights riding le cheval canadien’s ancestor, with its black and distinctively wavy mane, long tail, feathered legs and sturdy build. Refined somewhat in Louis XlV’s time by the addition of Barb blood from Spain, these horses were nevertheless imposing and immensely strong” (p9).

Gladys Beattie in her book The Canadian Horse writes, “The historian, Faillon, described the horse as ‘small but robust, hocks of steel, thick mane floating in the wind, pricking sensitive ears at the least noise, going along day or night with the same courage, wide awake beneath its harness, spirited, good, gentle, affectionate, following his road with finest instinct to come surely to his own stable’.”

Canadian on the Bayeux Tapestry

By Katie Spalding, 13 July 2018: “So, you know the Bayeux Tapestry, right? The 70-meter-long (230 feet) embroidery (not, in fact, tapestry, but let’s not quibble) tells the tale of how the Norman forces invaded Britain nearly a thousand years ago, and it has fascinated scholars ever since. So much has been written about it, in fact, it’s hard to imagine there’s anything new left to say. But somehow, George Garnett, a professor of medieval history at the University of Oxford, has done it.

” ‘To the best of my knowledge, no-one has yet tallied the number of penises,’ writes Professor Garnett for BBC History Magazine. Naturally, he has taken it upon himself to correct this historical injustice. ‘By my calculations, there are 93 penises in what survives of the original tapestry. Four of these are attached to men, and what may be a fifth appears on a soldier’s corpse in the margin,’ he explains.

” ‘This leaves 88 penises belonging to horses, for those keeping count. And while the human genitalia confined to the edges of the tapestry, the horses’, uh, appendages are proudly displayed in the main body of the work.’

Officially the happiest horse on the Bayeux Tapestry: a groom presents a battle stallion to William the Conqueror.

“Professor Garnett claims that his work sheds important light on how we should understand the famous embroidery. ‘It cannot be simply a coincidence that Earl Harold is first shown mounted on an exceptionally well-endowed steed,’ he writes. ‘And the largest equine penis by far is that protruding from the horse presented by a groom to a figure who must be Duke William, just prior to the battle of Hastings.’

” ‘Which ties in with the leading theory that the tapestry was commissioned by Bishop Odo, William the Conqueror’s half-brother.’

“Yes, it turns out this legendary artifact may actually be a literal dick-measuring contest. Garnett’s theory is that the strength and importance of the various characters can be understood by the size of their horse’s manhood (horsehood?).

“But perhaps this idea isn’t so far-fetched after all. Remember those five human penises that were painstakingly embroidered into history? Some scholars believe these have a much deeper meaning than it might seem at first glance – think ‘elaborate references to ancient Greek fables’ rather than ‘raunchy bro humor in the margins’.

“However, like any good historical conspiracy, this theory might just throw up more questions than it answers. Most historians think that the Tapestry was designed for a church audience – the highly educated monks and clergy of 11th-century England. But, Professor Garnett admits, his theory does make us wonder whether it could truly be, as he calls it, ‘appropriate viewing for monks’.”