Late Loyalists and the Markham Gang of Ontario

From Wikipedia: “The Markham Gang was a notorious criminal organization located primarily in Ontario, Canada, in the middle of the 19th century. Evolving from organizations founded to support the Upper Canada Rebellion of 1837, the Markham Gang used its private communications network of couriers across what was then Canada West to build a criminal empire that spread into neighbouring states. Like the organization that spawned them, the Markham Gang was made up primarily of well-to-do farm owners and their families [many of whom were both late loyalists and pacifists – Children of Peace, Quakers, and Hicksites]. The gang was broken up in 1846 with one hanging, four life imprisonments and many lesser convictions, but the survivors were almost all released within five years and returned to society. The name of the gang, an invention of the press, came from the final series of arrests which took place in Markham.”

See the folkways of late loyalists and how they differ from United Empire Loyalists.

Hugh Scobie, British Colonist, “Our readers may remember that we last summer noticed the existence of an extensive and organized gang of rogues, in the township of Markham and other connecting townships in this and the neighbouring district: that a great many daring burglaries and other crimes had been perpetrated by these criminals in the townships in question, and that Mr Gurnett had ferreted out and succeeded in arresting and lodging in gaol several of the gang, viz., Robert Burr, Trueman Pennock, Harvey Graham, and two or three others . . .”

“These rascals [Markham Gang members]… avail themselves of the opportunities which these visits afford them, to ascertain who has money, where it is kept, and at what point of the premises an entry may be most effectively made for the purpose of robbing them. This information is conveyed to the ‘operatives’ of the gang, who soon afterwards proceed to enter and rob the premises most scientifically – rewarding the informant with part of the booty.”

The trials of those principally involved in this horrendous assault on the Morrow family is covered in detail in Chapter 8 of Arculus. 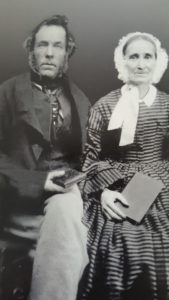 Elements:Markham gang, The War of 1812