Davis vs Styres, and the case of lot 45

Squire Davis has several run-ins with the authorities. Here is one.

Squire’s claim to property in the Township of Onondaga on the Six Nations Reserve is contentious. Squire stands accused of getting a man inebriated, encouraging said fellow to sign a quit claim, vis-à-vis lot 45, and, if all this isn’t sketchy enough, a certain Hilton Hill suggests Squire turns the poor befuddled fellow, a certain Joseph Miller, over to the Union army. What is the real story?  Interesting fact: Joe Miller turns up hale and hearty in the 1871 census of the territory.

Here are the case and notes re: Davis versus Styres as John A Noon records them.

Facts of the case.

“The plaintiff [Squire Davis] seeks to secure possession of Lot 45 . . . from James Styres, present occupant. Davis produces a documents signed by Joe Miller, brother-in-law of the defendant, which assigns to him full rights to the lot in question. The defendant [James Styres] avers that the document produced by Davis should be considered null and void since it was executed by Miller while in the state of intoxication. The means by which Davis obtained the document, according to Styres’ account, are these: The lot in dispute was given to his sister and her husband by the former’s father at the time of her marriage to Miller. It was there that the Millers set up housekeeping and lived until the disappearance of Joe Miller, under circumstances which the defendant contends are related to this case.

“While Mrs. Miller was away from home visiting her parents, her husband in the company of Davis became intoxicated and in this state executed the document in favour of the plaintiff. The defendant states that the whereabouts of Miller is now unknown, but he believes that while under the influence of intoxicants he was taken by Davis to Buffalo where, still intoxicated, he was sold into the army of the United States. Styres states that he was now occupying the property claimed by the plaintiff in order to prevent his sister from being defrauded of property that was rightfully hers.

“Points of Law Involved. 1) Was the signer of the quit claim deed in favour of the plaintiff in an intoxicated condition at the time the deed was executed? 2) Does the state of intoxication render a person incapable of executing a valid quit claim deed?

Note 49. “The case came before Council in 1861 before the office of Secretary of Council had been created. Therefore, at this time there existed no officially recorded minutes. The documentary source for this case is a letter written by D. F. Thorborne (2) superintendent of the reservation [sic], to James Styres (dated Oct 1st, 1861) informing him of the decision of Council. [Noon] was fortunate securing further information regarding the defendant’s claim from [H]ilton [H]ill whose mother-in-law was related by marriage to the Styres family. It is not certain that the document in the possession of Davis was a quit claim deed, but I [Noon] believe it is correct to assume that it functioned as such.

Note 50. “[H]ilton [H]ill informed [Noon] that strong suspicions were current at that time that Davis was working a racket [CRIMPING] whereby he intentionally made Indians intoxicated, took them in such condition to the States, and secured a bounty for procuring enlistments in the Union army.”

(2) David Thorburn (1790 – November 1862) was born in Scotland and after emigrating to British North America was a political figure in Upper Canada and Canada West. He was an oppositionist (later Reform) candidate, who, from 1835-1844, represented 3rd Lincoln in the Legislative Assembly of Upper Canada. He also served as warden for the Niagara District. Thorburn was a director of the Niagara Suspension Bridge Bank of Queenston that collapsed in 1844. Later named Indian superintendent, Thorburn found himself in conflict over the affairs of the Grand River Navigation Company. His allegiance fell between two stools: the wishes of the colonial government to take and use Indian money for the Navigation; his fiduciary responsibility to the Six Nations Confederacy not to spend their money unwisely or against the wishes of the Councils. In 1845 Margaret Davis and Patrick O’Reilly submitted their affidavits concerning the criminal conduct of Smoke Johnson to Special Commissioner David Thorburn. In 1861 Thorburn ruled on Davis vs Styres in favour of Davis.

David Thorburn was the father of Dr. James Thorburn.

Post Script: As to the matter of Squire Davis’s crimping, one must point out it’s likely fake news. Considerable research on the subject finds no evidence to support the rumour, which does not mean HH’s claims are untrue in general, only unlikely to be true insofar as Squire and Jennet are concerned. Davis brothers and/or cousins may have been culpable.

What is a crimp? A crimp is a “broker” who captures a man to sell to an underpowered army. Crimping is age-old. In the American Civil-War crimps were active in Canada–especially on the Union side.

Definition, as found on World Wide Words at www.worldwidewords.org/

“We all think we know what crimping means, but the usual idea of compressing something into small folds has nothing to do with this process — or at least so far as we know, since it is of uncertain origin. This crimping means impressing men into the army, navy or merchant marine. It was like press-ganging, but done on a freelance basis by men acting as agents or go-betweens. 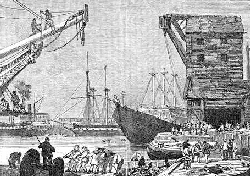 “That reflects the relevant sense of crimp for a man who crimped. It’s recorded from around the middle of the eighteenth century, for example in John Blake’s A Plan For Regulating the Marine System of Great Britain of 1758: ‘When a master of a ship hath lost any of his hands, he applies to a crimp who makes it his business to seduce the men belonging to some other ship.’ It also appears in a better known work, Frederick Marryat’s Mr Midshipman Easy of 1836: ‘Offering three guineas ahead to the crimps for every good able seaman.’ Writers in the later eighteenth century had fun comparing crimps with pimps but there’s no etymological connection.

“The impressed men were often temporarily imprisoned in a crimping house before being handed over. In 1794, a man attempted to escape via a skylight from one near Charing Cross in London that was run on behalf of the East India Company but fell to his death. This led to riots in which several such houses were destroyed by the mob.

“Another word for the process was trepanning, which probably has no linguistic link with the medical technique of cutting a hole in the skull. We know little about where it’s from; the Oxford English Dictionary says that it is ‘a word of obscure and low origin, probably originally a term of thieves’ or rogues’ slang.’ To trepan someone (stress on the second syllable) was to entrap, inveigle, ensnare or lure them into some situation not to their benefit. It was of wider application than just press-ganging and some contemporary writers made a distinction between the two methods’.” from World Wide Words www.worldwidewords.org/weirdwords/ww-cri2.htm